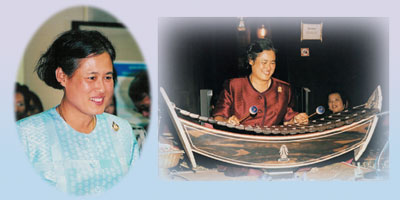 Her Royal Highness Princess Maha Chakri Sirindhorn has been interested in writing poems since she was young. One of her well-known poems is ìRakî or ìLoveî written when she was only at the age of twelve. Thereafter, His Majesty King Bhumibol Adulyadej composed music for this poem and other musical masters have also written music for her others, creating many Thai contemporary songs.